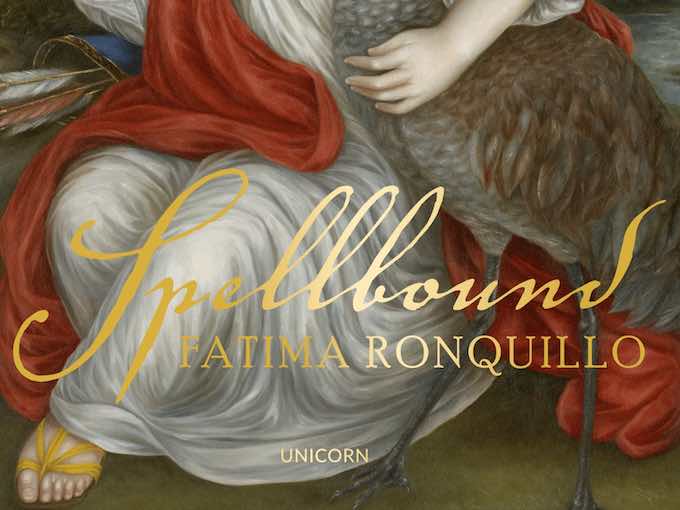 Spellbound is the first survey of the self-taught artist’s paintings. Over the past decade, Fatima Ronquillo has created a personal modern aesthetic by combining European old master techniques with a magical realism found in Early American Colonial and Latin American Art. Ronquillo presents an imagined world of personages in military or exotic costumes who confront viewers with an ambiguous gaze. These figures are often accompanied by mischievous cupids dressed as Mozartian pages or wild animals which are either spirit guides or inner demons. Often they are shown with mementos or ‘recuerdos’ such as the lover’s eye jewelry to demonstrate one of the many stages of love, from the bliss of the requited to the despair of the rejected. Alongside the recurring theme of love, lush flora and mysterious fauna offer a glimpse into a world of myth and theatre. These compositions marry traditional portraiture, often Set against pastoral and idyllic landscapes, with an underlying sense of drama and playfulness. Ronquillo’s paintings are visions of beauty and love which incite a mad enchantment to the heart and mind.